During Tokyo Game 2022, we had the chance to talk to former ATLUS composer Shoji Meguro about his first independent game Guns Undarkness, which was recently successfully funded on Kickstarter.

Guns Undarkness is a stealth-based science fiction RPG where you try to defeat the enemy before getting into turn-based combat. As Meguro’s first attempt at making his own game, he signed up with Kodansha’s Game Creators Lab, an independent support organization for game developers. Although he was not selected, he received 500,000 yen and raised the rest of the game’s development funds through Kickstarter.

Despite leaving ATLUS, he still plans to work with the company as a freelance composer. Below we ask for details.

Now that you no longer work at ATLUS, does that mean you could work with other companies?

Shoji Meguro: “I have a good relationship with ATLUS, so I don’t think I’ll be working with other companies for a while. That’s not to say I can’t collaborate on a song or two with other people, but as far as creating a full soundtrack, I’d only do that with ATLUS right now. But that’s also not a promise that I’ll be the composer for future Persona games.”

How has your original concept for Guns Undarkness that you conceived in 2005 changed so far?

Meguro: “It’s almost completely changed. The only thing that stayed the same was that I knew I wanted to make a JRPG with guns in a science fiction setting.”

The storyline mentions that there was a gap between rich and poor. Does this game have a political message?

Meguro: “No, I don’t like to think about politics, so it’s not focused on political topics. In this world, the gap between rich and poor is leading to a war in which the world is being destroyed and we need to see what humanity does after such a major reset.” 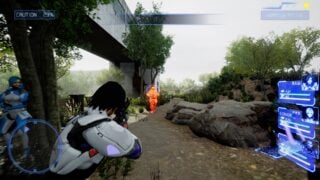 Silly question, but when choosing the year 2045 for the setting, was that year chosen at random or is there a particular reason?

Meguro: “I’m trying to look at the real world timeline of events and technology development and come to the conclusion that technology could be at some point in that year and that. So when I put all that on the table, I came up with 2045.”

In screenshots and videos, the main character’s name is simply ‘Protagonist’. Does this mean you can name the character?

Meguro: “Ah yes, the player will determine his name. This is a bit of a spoiler, but there’s a scene where Will says something like, ‘Hey, register your name.’”

Characters are also often shown with a particular weapon. Is everyone limited to one type of weapon, like Naomi with pistols, or can you change them?

Meguro: “That’s a good question. For the protagonist, you can choose any weapon you want, while side characters specialize in one weapon type, such as pistols with Naomi, but they also have a secondary weapon that you can choose for them.

Can you tell us about the stealth system?

Meguro: “You don’t shy away from encounters, like in some games. Instead, you try to sneak up on an enemy and hide your characters around cover to try and get the best positioning for a sneak attack.

“When you aim at enemies, you can see a percentage of accuracy. The longer you keep your sights on an enemy, the more your accuracy goes up, leading to more damage when starting battle, in addition to not missing. However, it is a risk. The longer you hold, the higher the accuracy, but the chances of the enemy turning around and seeing you also go up. So you’re in a situation where you’re aiming and thinking, ‘Come on, just a little bit more to 100 percent… please don’t turn around.’”

Meguro: “Oh, I love XCOM. He (points to Yuki Katayama, Kodansha) showed it to me and said ‘Hey, try this game!’ and I got so addicted to it that I fell behind with my work (laughs).” 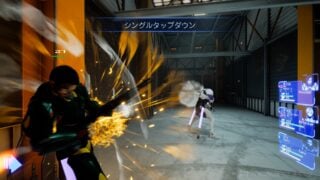 I see there is a relationship system. Is it similar to Persona? What are the benefits of developing your relationships?

Meguro: “Yeah, it’s very similar to Persona. You can talk to your teammates to improve your relationship with them, which leads to unlocking team combination attacks in battle.”

Now that you are developing a whole game instead of just music, there are many things to consider, such as modeling, animation, level design, and so on. What was the most fun and challenging?

If you make music for games, do they know it’s for a certain level or scene, or do you just make a bunch of songs and apply them later?

Meguro: “80 percent of the time I’m making a track for a specific scene or level, and about 20 percent are songs I’ve made and put in post.”

For video game music, should you factor in something gaming related, like matching the beat to the character’s speed or timing a chorus when an event occurs?

Meguro: “Of course we take the speed of the track into account and make sure the track from one scene to the next isn’t too jarring or different – there are a lot of components to it. Timing isn’t really something I think about, I’m just making another song for a different scene.”

Before we let you go, is there anything you want to say to the fans?

Meguro: “We are very excited to achieve our goals and make the game for everyone. Seeing everyone’s enthusiasm has given us 120 percent energy to work even harder. I hope fans look forward to the music and support us in making our first game. As a designer, I’m like a first-grader with no experience. I will continue to work hard to improve the game. Thank you to both those who funded us on Kickstarter and those who didn’t. Please look forward to it.”

Thank you for your time, Mr. Meguro!